I had intended this to be a witty and humourous post. It seems one of my original blogging buddies, Frank over at AFrankAngle, has reached that zenith (or nadir) of WordPress fame – Freshly Pressed! I planned to start the mourning appropriately. (Frank views FP as more albatross than award – just one of the reasons I enjoy him so much.)

But fate had different plans for me. 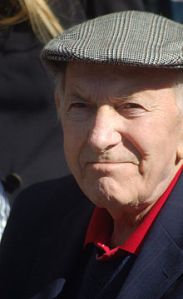 If you don’t recognise the name, I recommend you check out Wikipedia. He was a great actor, able to play a wide range of emotion, and with an earnestness that pulled you in, willingly or not. I remember watching him in both “Odd Couple” and “Quincy”, and my absolute favourite scene of his was from “Quincy” when, unwillingly presented with a class of brand-new coroners, he introduces them to a bloated corpse pulled from the, then proceeds with a most cavalier yet gruesome autopsy until every last recruit has passed out – then peering over the table to make sure all were down, and having seen his handiwork, heading off to lunch. No gore, no horrific special effects, just good old-fashioned talent.

Goodbye, Jack. Oddly fitting you should leave us on Christmas Eve. After all, the Magi need a brilliant star to follow, and yours was one of the most brilliant.

The Queen Creative
Rule of Stupid

A tale of a trail

If you can't bring mountains to some idiots, the idiots must go to the mountains

Life With The Top Down

Crazy is relative. Just ask my relatives. And music!

The Rants & Rambles of A Grumpy Old Dude

...because life is funny.

A frustrated writer, who is her own worst enemy

Notes on this, that & [everything in between]

I'm just here to better myself as a person.

Fight Against Stupidity And Bureaucracy

More than just another wiseass

Witty Little Secret ~ A Deployment Diary of Another Sort

...because laughter is the best laxative

UNSUBSCRIBE FROM SOCIETY'S VERSION OF SANITY

Analyzing the Global Impact of Cybersecurity, Law, and Business Risk

Where the Nurses are Pretty and the Doctors are Pissed

The Hack Novelist
The Good Greatsby

Paul Johnson's comedy blog: I didn't get into comedy to be rich or famous. All I've ever wanted was to be loved...by somebody rich and famous.

mom working as a technology executive

Truth According To Tom

Satire for the masses

From the author of 'Portsmouth's World War Two Heroes'

Still Skeptical After All These Years

Among the Crystals, Dragons, and Fae

Random thoughts on life, my world, and other stuff

Weaving a tapestry of stories, word by word

WriteChic Press
The Tyranny of Tradition

Lamentations and Jeremiads 25 Years After The End Of History

And A Mom's Interpretation

a world of words

Welcome to my world

Thoughts from the Inner Mind

The Life of Jamie

Blogging about the odd/crazy things that happen in my daily life!

More than a travel blog. So much more.

Musings of a Progressive Realist in Wonderland

Once upon a Time, in rural North Texas, there lived an Idiot.